(The Symbol of Akademgorodok: a sigma representing the sum of Soviet science with a lightning bold symbolizing the new city springing into existince) Throughout the first half of its existence, much of the Soviet Union’s power had been focused on heavy industry and military might. However, after WWII and the death of Stalin, this focus … Continue reading →

END_OF_DOCUMENT_TOKEN_TO_BE_REPLACED 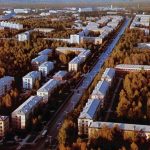 Though Khrushchev’s Thaw brought about significant political and social changes in Russia, many academics and scientists continued to view the Soviet bureaucracy as an impediment to their work. With newfound political freedom and a re-emphasis on technological advancement, Soviet scientists looked for ways to organize themselves into a physically close community in order to be able […]