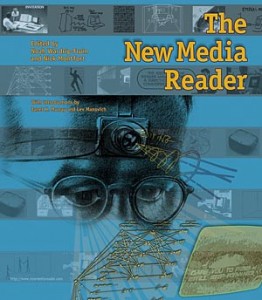 Week 1: Feb. 5
Web 2.0 / Networked Seminar Orientation
Videos in today’s session:
Douglas Engelbart introduction to “The Mother of All Demos” (1968)
Mike Wesch, “The Machine is Us/ing Us” (2007)
Reading: Editors’ preface and excerpt from  “Inventing the Medium.” Janet Murray’s Introduction to the New Media Reader

You need one. Sign-up for a blog on the Virginia Tech WordPress system here.  (vt.edu email address required) Send Amy the link so she can syndicate your blog to the main site.

Week 2: Feb. 12
Reading:
Vannevar Bush, “As We May Think” (NMR); also in The Atlantic, July 1945
Resources:
Photograph of Bush at Langley (1938)
Video interview with Edward R. Murrow and Vannevar Bush
Bush, “Science the Endless Frontier” (report to FDR; founding document of the NSF)

A) Nuggets: Select a passage from “As We May Think”  that resonates with you and do one (or both) of the following:

1) Respond to your nugget (meaningful passage) in a post on your blog.  You can agree, disagree, or jump off of your nugget, or work with it in whatever way you find most interesting.  Think about exploring the words as well as the meaning of the passage as a whole.

2) Tweet a response to your nugget to the seminar hashtag: #vtnmss15

Comment on other seminarians’ blog posts about their nuggets and / or respond to their tweets.  Make sure to use the seminar hashtag: #vtnmss15

Optional: Watch “The Imitation Game” (starts at The Lyric on Friday)

A) Post about Turing, OR Post/Tweet an image that resonates with you in terms of “Machines that can Think and Learn”

Look over the remaining sessions and identify one you would like to facilitate. Please have a fall-back choice in mind in case some readings are more popular than others.

D) Start thinking about the “Makes” for your week.

Share a “nugget” and /or  an app that has fulfilled Kay and Goldberg’s predictions.

Post something abut the communication medium you think has had the biggest impact on our world and why.

2) Share a diagram of data space, either one you find or one you create.

Bonus question: Is data space a sacred space, a secular space, or something else altogether?

Brenda Laurel, “The Six Elements and the Causal Relations Among Them
and Star Raiders: Dramatic Interaction in a Small World

Week 10 Make:
1) Identify an example of human-computer interaction (from today) that has some/ most/ all of the six elements.

or
2) Which of the six elements you think is most critical for human-computer interaction and why? (nugget: which of the six most resonates with you, or do you also think all are necessary?)

Are there certain features of a pre-established form which we may not want to apply to new media?  What are they are why?

Illich is highly critical of the schooling system–so much so that it might be difficult for those of us who have invested heavily in education (ahem) to not feel affronted by some of his positions and/or propositions. But let’s entertain the notion of a “deschooled” society, shall we?

1. Identify a real-life example of one of Illich’s four “approaches” (in the subsection “Four Networks”) that has made a difference in your life–teaching you something new, for example. What did you learn? Could you have learned it in a traditional classroom environment? Which would you have preferred?

2. Provide an image, video, doodle, screen-grab or other visual representation of this or one of the other three approaches that demonstrates a deschooled learning opportunity.

Choose one or more of the following:

1) Both the readings McCloud & Berners-Lee, et al. consider how interfaces shape user experience. For this week’s make, do a brief analysis of time (like McCloud did for comics) as encoded in a digital interface of your choice. For instance, how is time represented on your web browser, smart phone, Apple Watch, Mac or Windows interface, YouTube, Twitter, WordPress, Scholar, or some other digital interface? And what are the implications for how users use the system/object/technology?

2) In several of the readings this term, we see a tension between those who believe users need to understand the mechanics of a system (i.e., be able to code) in order to be critical users of that system, versus others who endorse making systems easy for users to use via standardization, wysiwygs, increasing accessibility, etc. (as in this week’s reading by Berners-Lee, et al.). What are your thoughts on this tension (if it does indeed exist)? And what are the implications of this tension for education/teaching with technology?

3) Since this is the last week we’ll be meeting, draw some observations across the readings we’ve done this term, and discuss how will you apply what you learned in the seminar to your teaching. What questions do you still have about applying the readings to your teaching?