A God Amoung the Stars: Iurii Gagarin

“I see no God up here.” These are probably the most famous words Gagarin spoke while in space, words that obviously are quite striking but profound. To understand this first we must understand the man, A simple Russian citizen would would rise to height none had ever achieved. Iurii Gagarin: the first man in space. […]

END_OF_DOCUMENT_TOKEN_TO_BE_REPLACED

Protecting Mother Russia Through the Church

World War Two was a tall task for the Soviets to overcome.  After years of domestic turmoil with cultural, political, and economic change, the “New Russia” was put to test.  This war (and Russia’s subsequent victory) meant a lot to…

END_OF_DOCUMENT_TOKEN_TO_BE_REPLACED

The War on the Church

In the early 1920’s, the newly solidified government of Russia began seeking to consolidate its gains and secure its future as the sole ruling group in Moscow. One of the primary objectives they set before themselves was the destruction of the Eastern Orthodox church, thus began years of anti religious campaigns, church closings and occasional, […]

END_OF_DOCUMENT_TOKEN_TO_BE_REPLACED

“…A tower that reaches to the Heavens…”

Red brick dotted the horizon puncturing deep into the black clouds of industry. Horizons that had once been speckled with gold coated Christian Crucifixes, were now framed in brick and coal. The Party had found its titan, the factory. The mass industrialization of the Soviet Union and its cultural effects came about due to Stalin’s ambitious Five Year Plan. … Continue reading “…A tower that reaches to the Heavens…” →

END_OF_DOCUMENT_TOKEN_TO_BE_REPLACED

This image and video relate to not only the Stalin’s First Five Year Plan, but also revolutionary culture. Because of the socialist government’s desire to control everything in Russia they banned religion all across that nation. These two primary sources show church bells being taken down (27 bells out of 32 bells in the video […]

END_OF_DOCUMENT_TOKEN_TO_BE_REPLACED

Vodka, the Church, and the Cinema

Leon Trotsky’s Vodka, The Church, and The Cinema outlines a the importance of three fundamental aspects of Russian society and culture during the Russian Revolution. First of all, Leon Trotsky was a Marxist revolutionary who was the founder and leader of…

END_OF_DOCUMENT_TOKEN_TO_BE_REPLACED 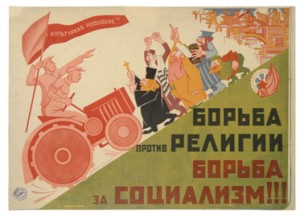 After the Bolsheviks gained power of Soviet Russia, one of their first priorities was to start a war on religion. The decree of January 20, 1918 was one step in the direction of a godless Soviet Union. The decree would disestablish the Orthodox Church and designate all clergy, no matter what religion, as second-class citizens the … Continue reading The Godless Communists →

END_OF_DOCUMENT_TOKEN_TO_BE_REPLACED

Trotsky’s essay on the role of cinema in the revolution gives a unique look into the philosophical foundations for almost ubiquitous policies in the USSR. Firstly, the analysis by Trotsky of the 8 hour work day interested me, because I’d always though of the 9-5 work day being an institution of the western world, whereas … Continue reading Cinema, the new Vodka, the new Church.

END_OF_DOCUMENT_TOKEN_TO_BE_REPLACED

A New Era of Manipulation

“Vodka, the Church, and the Cinema” This writing by Leon Trotsky provides a glimpse into what Trotsky envisioned the new culture as. As one of the leaders of this new soviet endeavor Trotsky looked towards the future but also the past. He saw how the old fit with the new, and how the old would […]

END_OF_DOCUMENT_TOKEN_TO_BE_REPLACED

Cinema as a Weapon of Revolution

In 1923 Leon Trotsky wrote an article for Pravda in which he explored the relationship of the church to the revolution, espoused the virtues of Cinema as a tool for re educating the masses, and went about describing how cinema could be used as a weapon by the Bolsheviks to destroy alcoholism and religion within the budding […]